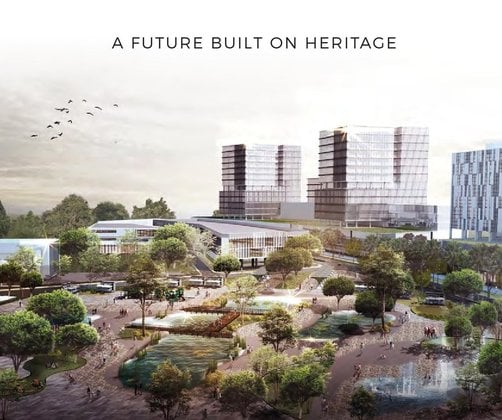 Customs and traditions embody the Capital Town San Fernando, Megaworld’s 21st township to be built with honor and prestige right at the beginning of the second decade of the 21st-century.

This enormous township is rising at the heart of the City of San Fernando, Pampanga’s center of rich history, culinary greatness, and the land of the giant Christmas Lanterns. Here, heritage is meeting progress with the development of Megaworld’s Capital Town, a mixed-use real estate development that will sit on 35.6 hectares of prime land right in the middle of San Fernando City and is touted to become the newest Central Business District (CBD) of the north. The initial development will be comprised of residential and commercial lots for sale in San Fernando City while preserving the city’s rich heritage and value. This will eventually lead to the establishment of a bustling business center with BPO offices, corporate centers, hotels, retail strips, commercial centers, shophouses, and residential enclaves rolled into one location. At the moment, commercial lots are on sale.

The Capital Town is specifically located along Capitol Blvd., San Fernando City, Pampanga. This address is in close proximity from the Pampanga Provincial Capitol, The Orchid Gardens, San Fernando Train Station, The Metropolitan Cathedral of San Fernando, SM Business Services, and less than 1km from the city proper. This strategic location makes this vast piece of property as an outstanding choice for foreign and domestic locators not to make a second thought in relocating on these seemingly endless property innovations where Megaworld has allocated more than PHP30-billion in a 10-year continued development.

Additionally, this land is a former site of the world-renowned Pasudeco (Pampanga Sugar Development Corp.), established in 1918 which became a major sugar processing plant in the province and was once its largest private employer leading Pampanga to become an economic powerhouse before WWII, until Megaworld acquire the property early in the first decade of the 21st century. Megaworld vows to retain much of the old Pasudeco’s rich heritage and bring the same to a new stage of growth and expansion without sacrificing its culture and value.

The Capital Town San Fernando is only 70km north of Manila and could be easily accessible through the North Luzon Expressway (NLEX) exiting via San Fernando. On the other hand, the Township is only a 30-minute drive from the Clark International Airport and the Clark Freeport Zone in Angeles City, Pampanga. The Township is a master-planned mixed-use community development that will integrate residential, commercial, office, institutional, and the retail elements, including a cyberpark, that will revolutionize the city’s landscape of a live-work-play-learn (LWPL) concept that is proven an effective tool in modern living in the contemporary business climate.

With these developments, Megaworld is looking forward to bringing in more prospective locators (such as BPO hubs) to the township which is expected to generate thousands of jobs for the people of Pampanga and the neighboring provinces.

Megaworld Capital Town in San Fernando City, Philippines is a premier Lot Only project available for sale. If you're looking to rent or purchase Capital Town, then check here first. We have full details of Capital Town updated regularly as well as everything you need to know about the availing and booking process, broken down into stages that includes selecting a unit, choosing a payment plan and buying your dream home at the right price. For price list, free site tripping or showroom visit, personalized service, model house, unit plans, floor plans, payment terms, CHAT LIVE with an agent 24x7. Always only buy from PRC licensed Real Estate Brokers and Agents.

Why Invest In  Capital Town

The emerging CBD in Central Luzon

As Megaworld is being true to its promises and sticking to the master-plan, the Capital Town San Fernando is going to be the first-of-its-kind in the north (of Manila) which is the 21st integrated urban township in the company’s investment portfolio and the first in the Central Luzon region. While Pampanga is currently dubbed the “Culinary Center of the Philippines”, the launching of Capital Town in mid-June 2017 in San Fernando City make the province under the radar of various industries that would have the potential to relocate their business in this new emerging Central Business District of the north. As an inland province, Pampanga is bounded on the north by Tarlac and Nueva Ecija, to the east by Bulacan, on the southwest by Bataan, and to the west by Zambales.

This strategic location of Capital Town within the frontiers of several provinces, where young professionals and skilled workers abound, the relocators herein will have no difficulty finding the right people for their industry. Furthermore, investors of the township’s commercial and residential lots will find their initial investment as a great privilege to gaining higher property appreciation in a short span of time.

We shall be the first to inform you of the major components that will make up the Capital Town San Fernando. This uniquely designed township, all of its 35.6-hectare of prime land, will be having some of the world’s finest elements in a mixed-use community. The project will be having a rainwater park and landscaped open spaces plus pocket gardens. This outdoor amenities will have concert area, biking and calesa (horse-drawn carriage) trail, leisure walk, jogging path, meditation and exercise garden, and a chapel by the lake. The next would be a mixed-use program of commercial, residential, education, and cultural developments comprising retails strips, cinemas, BPOs, and F&B. There will also be a green central avenue with bike lanes, wide walkways, and arcades. The road network is 30 meters wide.

The proposed Pasudeco Sugar Mill Museum will be integrated with commercial areas with added tourist attractions and destinations. Eventually, aside from the museum, the Capital Town will also be having well-designed fountains and tribute statues for those who established Pasudeco, and so much more distinct innovations.

The Capital Town San Fernando’s proximity to Metro Manila, Clark Freeport Zone, the Clark International Airport, and the adjoining provinces make the township a truly marketable investment. Moreover, the city of San Fernando is one of the Philippines’ first-class cities and was recently awarded as “The Most Business Friendly City” in the country because of its efficient accountability, ease of doing business, transparency, efficient quality management system, and the lack of red tape in government transactions. The city itself currently has its own commercial districts where Robinsons Starmills Pampanga, SM City Pampanga, San Fernando Public Market 1&2, San Miguel Corp. Manufacturing Plant, Coca-Cola Philippines, Pepsi Cola, first-class cinemas, various restaurants and fast-food chains, more than 40 banks, and dozens more industrial and commercial centers which are presently based around the city.

Will feature a Shophouse District

The Capital Town, a Township enclave in San Fernando City, will initially feature the Shophouse District, the first product of the township. The Shophouse will be made up of unique business concept on its ground level and a residence right above it. Furthermore, the Capital Town has commercial lots that are now on sale. For more details on how to buy commercial lots and about the Shophouse District, please contact our ever reliable real estate brokers on this website to update you and give guidance on how to make a reservation and other important info regarding this property. Chat now! It’s free!